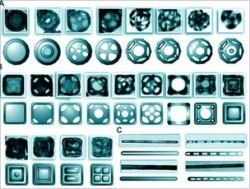 The Catalan Institute of Nanotechnology in Bellaterra, Spain has developed a new way to create complicated nanoparticle shapes.

The chemical process hollows out particles made from silver with cationic gold. Cationic gold has had some electrons removed and when it comes into contact with the tiny silver cubes at room temperature the cationic gold “attacks” and “carves” out the silver cube as it steals the electrons.

Once the silver has lost its electrons it dissolves into a liquid solution and the cationic gold is transformed into normal metallic gold as it gains the missing electrons. The end effect is that the gold then protects the silver from further action, but a single hole is left on the cube allowing more cationic gold to burrow into the cube.

After a while a new process starts, the Kirkendall effect, where the silver atoms inside the cube start releasing more electrons while moving to the edge of the cube and then being transformed into the liquid state.

What is really clever is that the scientists can now control how the process advances so that they can create shapes of their choosing. The diagram shows a series of complex nanoparticles that have been created using this process.

This process really does seem more like “alchemy” then any other process I have heard about so far. Gold is created in the process, although it is first “destroyed” by removing the electrons.

This new process could pave the way for more research and eventually the development of nanoparticle drugs  to combat disease. One of the greatest hopes is that nanoparticles could be used to fight cancer, in a literal sense, by attacking and destroying cancerous cells.

Ray Kurzweil talks about nanobots here and how nano-engineering could solve our energy needs and also boost human conciousness and health.

Moore’s Law suggests that we will see rapid advancements in this technology which means that some of us may get to see nanobots used in technology and medicine in our lifetimes.

There is already a nanobot that can cure Type 1 Diabetes. A nanobot has been added to the blood that mimics the effect of insulin and allows blood sugar to be taken up by the body. Diabetes is one of the biggest health problems we are facing today. Type 2 Diabetes is the most common form, caused by poor diet and obesity, but the same process could “cure” a T2 diabetic too. Currently it has only been used in lab tests.

Other uses for nanotechnology include neutralizing pollution and toxins in the environment, enhancing the immune system boosting the physical possibilities of the human body. If nanobots can carry oxygen in the blood more efficiently than red blood cells humans may be able to sprint marathons with breaking a sweat!

The future of nanotechnology is certainly very exciting.

“The role of nanotechnology in diabetes treatment: current and future perspectives” by Dennis Samuel A1, Dhruba Bharali A2, Shaker A. Mousa. International Journal of Nanotechnology, Volume 8, Number 1-2 / 2011.